I’d like to thank everyone who participated in the recent Max’s demon thread, it might be helpful to revisit that OP for context before continuing on to what follows here. http://theskepticalzone.com/wp/maxs-demon-a-design-detection-riddle/

As promised and for what it’s worth I’d now like to submit my proposal for a method for detecting design in situations like Max’s demon where instead of looking at a single isolated artifact or event we are evaluating a happening that is extended spatiotemporally in some way. END_OF_DOCUMENT_TOKEN_TO_BE_REPLACED

Suppose Max comes to you with a sealed but clear container consisting of two separate chambers with two visible certified thermometers mounted on the sides of the two chambers. Thermometer one reads 100 degrees and Thermometer 2 reads 10 degrees. Max tells you that the temperature differential you see is the result of tiny invisible demon that controls a microscopic door between the two chambers. As individual gas molecules approach the door, the demon quickly opens and shuts the door so that only fast molecules are passed into chamber one, while only slow molecules are passed into chamber two.

Your mission if you choose to accept it is to devise a way to objectively verify the demon’s design influence on the contents of the container?

As always when it comes to riddles like this there are few ground rules.

1) you may examine the container and it’s contents in any way you like as long as you don’t violate it’s physical integrity because that will let the demon escape and ruin the closed nature of the system.

3) You may examine the thermometers to verify that they are functioning correctly or replace them with ones of your choosing if you like.

I don’t want to spoil the fun by sharing my proposed method for detecting the demon’s design until I hear some of your ideas.

What do you say is objective design detection possible in this case?

Recently I described a possible alternative Turing test that looks for certain non-person like behavior. I’d like to try it out and see if it is robust and has any value.

Here is some data represented in an ordinary control chart. 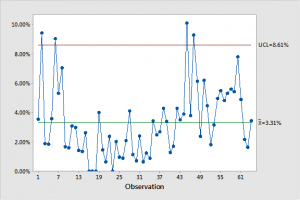 END_OF_DOCUMENT_TOKEN_TO_BE_REPLACED

I found the recent contest in which an algorithm was able to successfully defeat four professional poker players in a particular version of poker to be very interesting.

What strikes me is not the fact that the algorithm was successful but the way in which it accomplished the task.

END_OF_DOCUMENT_TOKEN_TO_BE_REPLACED

Some interesting entailments present themselves If we accept that minds do abductive inference differently than non-minds. For instance it allows us to have some fun with neural networks.

There is an AI experiment from Google that attempts to guess the subject of your doodles. I’ve found It can be easily defeated by simply drawing a random line through the middle of the screen before you begin to draw your picture. Even when your drawing skills are good the AI will usually get it wrong simply because it will assume that the line is an integral part of your drawing and not just a red herring or noise.  END_OF_DOCUMENT_TOKEN_TO_BE_REPLACED

This is the first part of a series of posts that are meant to help me think through the relationship between ID and Turing tests. Please be patient I will get to the controversial stuff soon enough but I want to lay some ground work first

Below is a quick refresher video explaining the three forms of inference for those interested.

END_OF_DOCUMENT_TOKEN_TO_BE_REPLACED

Following up on my last post I’d like to suggest another video from Leah Libresco that perhaps should be required viewing here.

Not only is it relevant to every conversation we have here but it is related to Turing Tests something that I find fascinating and important for “my Game” if I ever get around to it.

Here is a link for the corresponding Ideological Turing Test

What do you think? Should we come up with some questions surrounding Intelligent Design?

This video from David Wood seems to be pertinent to almost every discussion that takes place here. Perhaps it should be required viewing to any who would participate in this forum.

What do you think?

I want to thank OMagain in advance for doing the heavy lifting required to make my little tool/game sharable. His efforts will not only speed the process up immeasurably they will lend some much needed bipartisanship  to this endeavor as we move forward. When he is done I believe we can begin to attempt to use the game/tool to do some real testable science in the area of ID . I’m sure all will agree this will be quite an accomplishment.
Moving forward I would ask that in these discussions we take things slowly doing our best to leave out the usual culture warfare template and try to focus on what is actually being said rather than the motives and implications we think we see behind the words.

I believe now would be a good time for us to do some preliminary definitional housework. That way when OMagain finishes his work on the gizmo I can lay out some proposed Hypotheses and the real fun can hopefully start immediately.

1.      Random– exhibiting no discernible pattern , alternatively a numeric string corresponding to the decimal expansion of an irrational number that is unknown to the observer who is evaluating it

2.       Computable function– a function with a finite procedure (an algorithm) telling how to compute the function.

4.      Explanation –a model produced by a alternative method that an observer can’t distinguish from the string being evaluated

5.       Designer– a being capable of producing artifacts

6.       Observer– a being that with feedback can generally and reliably distinguish between artifacts and models that approximate them

Please take some time to review and let me know if these working definitions are acceptable and clear enough for you all. These are works in progress and I fully expect them to change as you give feedback.

Any suggestions for improvement will be welcomed and as always please forgive the spelling and grammar mistakes.

Several regulars have requested that I put together a short OP and I’ve agreed to do so out of deference to them. Let me be clear from the outset that this is not my preferred course of action. I would rather discuss in a more interactive way so that I can learn from criticism and modify my thoughts as I go along. OPs are a little too final for my tastes.
I want to emphasize that everything I say here is tentative and is subject to modification or withdraw as feedback is received,
It’s important to understand that I speak for no one but myself it is likely that my understanding of particular terms and concepts will differ from others with interest in ID. I also want to apologize for the general poor quality of this piece I am terrible at detail and I did not put the effort in I should have due mainly to laziness and lack of desire.
With that out of the way:
END_OF_DOCUMENT_TOKEN_TO_BE_REPLACED