Does this even need saying? That I should even feel moved to write this post, in this day and age, seems extraordinary. But an increasing number of people are latching onto the hoary old idea that there is no such thing as a virus – that viroloigists have been studying an artefact all this time; a product of the organism rather than an entity hijackiing host biology in order to spread between hosts.

END_OF_DOCUMENT_TOKEN_TO_BE_REPLACED

I once offered nonlin.org the ‘fridge-o-matic’ challenge. The idea was to give me a number from 1 to 9 (a shelf in my fridge/freezer), and a lateral location Left, Middle or Right, and a depth locator Front, Middle, Back. That gives 81 sectors. I go to the named sector and fumble for the nearest organism (he’d have to trust me not to cheat). If it’s a stew or pizza I’d need more info. Then I’d need a chromosome number in that organism, and a gene number on the chromosome. We could shortcut the back’n’forth by giving numbers 1-50 and 1-10,000 which I’d then normalise to the actual counts.

END_OF_DOCUMENT_TOKEN_TO_BE_REPLACED

An earnest, slightly manic anti-vaxxer (is there any other kind?) shoved  this across the virtual desk at me yesterday. Van den Bossche thinks you shouldn’t mass-vaccinate in a pandemic because you create a selective environment that favours vaccine escape mutants, somewhat by analogy with antibiotic resistance, I suspect.

END_OF_DOCUMENT_TOKEN_TO_BE_REPLACED

Nonlin.org has a burning desire to discuss sexual selection. So, let’s.

The topic was tangential (though not entirely unrelated) to the evolutionary psychology thread. Nonlin was unable to restrain his contempt for his interlocutors, and so his final missive was guanoed. The opportunity to repost was declined, as guanoing is ‘censorship’ (in plain sight!) and a ‘white flag’ allowing nonlin to declare victory and strut around like … well … a peacock.

END_OF_DOCUMENT_TOKEN_TO_BE_REPLACED

Over at the “IDM collapse” thread I rather churlishly rejected CharlieM’s invitation to read an extensive piece by Stephen L. Talbott. Discovering he is a fan of Velikovsky did little to encourage me (that is, I fully realise, an argument from authority, but life is short and authors many. One needs a filter). What did catch my eye, however, is the fact that he is a contributor to Third Way of Evolution. This, on their front page, is what one might term their ‘manifesto’. END_OF_DOCUMENT_TOKEN_TO_BE_REPLACED

‘Stay the fuck home’. A less effective means of gaining general co-operation from the instinctively anti-establishment would be hard to imagine. How about you get the fuck out of my face? Our more formal UK government messaging has plumped for the ‘will-no-one-think-of-the-the-children’ emotional arm-twist of ‘Stay Home, Protect The NHS, Save Lives’. This appears at the foot of the rash of notices that has appeared all over my own rural region requesting people to approach a farm gate on a public path as they would open heart surgery, and disinfect or wear gloves before touching. After a day slapping cows’ backsides (I am hazy on the details of the profession!), it would be too much to expect farmers to take responsibility for their own biosecurity, and wash their own hands before dining.

END_OF_DOCUMENT_TOKEN_TO_BE_REPLACED

I am sure that many readers have already concluded that I do not understand the role of sex in either organic or biotic evolution. At least I can claim, on the basis of the conflicting views in the recent literature, the consolation of abundant company.

What’s sex all about? This question has been exercising biologists since well before Williams’s time, but in the 1970’s, with the rise of ‘gene-centrism’ and the related controversy over group selection, a succession of prominent authors grappled with the problem, trying to fit it with current evolutionary theory to no-one’s particular satisfaction. Males were deemed an impediment to a female’s efforts to maximise her reproductive output, time wasted on these feckless types resulting in her only passing on 50% of her genes per offspring. From the perspective of a ‘selfish gene’, meanwhile, getting into every offspring seems a preferable fate to only getting into half of them. On the basis of these apparent large costs, a cryptic offsetting benefit of corresponding magnitude was assumed. Like Godot, it is yet to appear.

Yet sex is widespread. All eukaryotes either do it now, or possess tell-tale signs that their recent ancestors did. Given that it appears costly to individuals, and genes, how did it evolve and why does it persist?

END_OF_DOCUMENT_TOKEN_TO_BE_REPLACED 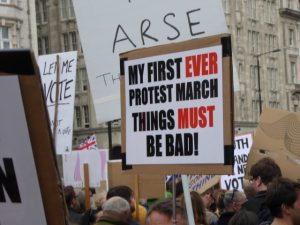 Brexit – you may have heard of it. For 40 years, since the UK joined the then Common Market, there has been a substantial ‘Eurosceptic’ mood in both main political parties and in the country. This has been influenced by a never-ending stream of misinformation END_OF_DOCUMENT_TOKEN_TO_BE_REPLACED

Apparently. This, at least, is the latest incantation. Repeat it often enough, and it is so. So what has actually died? What elements of Darwin’s theory(/ies) of evolution have been buried? I can certainly think of one – his theories of variation were wrong, superseded by Mendel, which simultaneously solved one of his dilemmas. But is that it?

Craig Venter has achieved celebrity status in Creationist circles for little more than a slightly embarrassed smile. In a discussion involving, among others, Richard Dawkins, Lawrence Krauss and Paul Davies, Venter makes the eyebrow-raising statement that he does not regard Mycoplasma as the same ‘life-form’ as other prokaryotes, or eukaryotes. His reasoning was that they have ‘different genetic codes’. Dawkins reasonably points out that their codes are ‘all but identical’ (they differ in just one position, Trp for STOP). Creationist videos of the exchange tend to fade on the aforementioned smile given in response. The videos are presented, breathlessly, as “Venter denies Common Descent in front of Richard Dawkins!”. However … one difference? Is that really enough to justify a claim of separate origins? This would be like claiming that Norwegian and Swedish had separate origins on the strength of the difference between æ and ä or ø and ö. END_OF_DOCUMENT_TOKEN_TO_BE_REPLACED

It’s not every day you discover a new (supra) kingdom, but a Facebook friend has done just that. Based on phylogenetic analysis (that thing that doesn’t tell us anything, heh heh), they differ genetically from known protists more than we do from fungi (which are more closely related to us than to plants).

We have been gibbering for many, many pages, at least nominally on the topic ‘Common Design vs Common Descent’. I’d like here to discuss an interesting fact I discovered during the course of this. I mentioned it twice, but readers seemed underwhelmed by what, to me, looks like a genuine scientific discovery (I haven’t searched exhaustively for priority). More importantly for present purposes, it provides a useful test-bed for several concepts that regularly do the rounds.

END_OF_DOCUMENT_TOKEN_TO_BE_REPLACED

Several themes have been doing the rounds lately. The origin of organelles, standards of evidence, common descent, the role of phylogenetic analysis, and the meaning of ‘prediction’ in science. Here’s a case study/rambling discourse that links a few themes.

END_OF_DOCUMENT_TOKEN_TO_BE_REPLACED

This has long been an interest of mine. It dates back to the old talk.origins days, prompted by a Creationist taunt with familiar tone – “I’d like to see someone explain the evolution of sex …” (with the implicit “hurr, hurr”). I articulated some thoughts, then was rounded on by the ‘mainstream’ community. I got a flavour of the world through Creationist eyes – an equally familiar tone: some very sharply expressed contempt and an invitation to f*** off back to high school and learn meiosis.

END_OF_DOCUMENT_TOKEN_TO_BE_REPLACED

I’m really not a fan of doing what I’m about to do.

But anyways, this is WJM @ UD

To be fair, when the proponent of a theory who claims that theory to be scientific fact provides little or nothing in the way of falsifiable predictions and offers largely only sweeping narratives and historical inferences based on ideological assumptions and/or an imagined infinite pool of unqualified possibility, it’s impossible for the opposition to offer specified rebuttals.

Until proponents offer specified, falsifiable predictions, the proper response to such a theory is to “lump everything into a single bucket and dismiss the entire topic.”

We are all too familiar with the schtick of certain posters. I’d like to know what they hope to achieve by pounding their limited collection of nails year in year out.

One could summarise the entire output of some in a dozen or so sentences. They KNOW that no-one will answer their challenges to their satisfaction. They KNOW (rather, they think they know) that this is because their challenges cut right to the heart of the matter, and evolutionary theory (“which evolutionary theory?”, a poster mutters for the thousandth time) is not an arena of explanation that will satisfy them. So, once you have satisfied yourself that this is the case, why keep buzzing against that glass like a trapped house-fly?

One of the densest Creationist tropes has to be ‘Common Design’. It is proposed as a direct competitor to Common Descent – template mediated copying of DNA – as an explanation for the high sequence similarity of two DNA segments. But what is actually held in common? If we look at a particular transposon sequence, and find it is in A and B but not C, and another that is in A but not B, etc, we can generally organise a set of such markers into a ‘tree’ structure, much as would be predicted by Common Descent. But no, we are assured that these apparent markers are in fact part of the ‘design’. If A is a whale, B a pig and C a deer, there is something that is vital for the function of both whale and pig but is definitely not required in deer. Instead, a sequence which, in whale and pig, sits either side of the insertion, runs uninterrupted in the deer. That, too, is functional, supposedly, even though the insert would give a product which was the A/B one with a gap and possibly a frameshift, if it were transcribed.

But this is held to be the case even if the sequence, with and without transposon, is never transcribed. A sequence that does nothing, and organises hierarchically exactly as would be expected of common descent, is nonetheless functional … because?

END_OF_DOCUMENT_TOKEN_TO_BE_REPLACED

Certain commentators seem surprisingly agitated about pursuing the idea that there is no ‘theory of evolution’. Some mean there is no single theory, although on examination the things they see as separate are frequently simply different components of the same broad process. Or, alternatively, they are referring to evolution in other senses, or in non-biological contexts. Others say there is no theory at all, as if that against which they argue does not even exist.

A theme has emerged that TSZ is somehow suppressing their concerns. So, in the spirit of suppressive dictatorships everywhere, here is a thread for people to say whatever they want about this vital topic. Hopefully without pasting in vast swathes of something already posted elsewhere – a link will suffice.