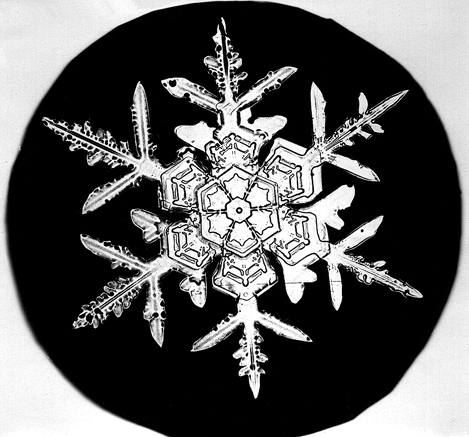 On the left is a photograph of a real snowflake.  Most people would agree that it was not created intentionally, except possibly in the rather esoteric sense of being the foreseen result of the properties of water atoms in an intentionally designed universe in which water atoms were designed to have those properties.  But I think most people here, ID proponents and ID critics alike, would consider that the “design” (in the sense of “pattern”) of this snowflake is neither random nor teleological.  Nor, however, is it predictable in detail.  Famously “no two snowflakes are alike”, yet all snowflakes have six-fold rotational symmetry.  They are, to put it another way, the products of both “law” (the natural law that governs the crystalisation of water molecules) and “chance” (stochastic variation in humidity and temperature that affect the rate of growth of each arm of the crystal as it grows). We need not, to continue in Dembski’s “Explanatory Filter” framework, infer “Design”.

The patterns below, also have six-fold rotational symmetry, and the process that created them is also one in which no two are alike.  However, despite this, they were, in fact, designed.  By me.  I wrote the program that generated them, and I can generate as many as I like.  The chances that two will be identical is pretty low (though possibly not as low as that of two snowflakes).  I did this by first of all “designing” a law (one that ensures six-fold rotational symmetry), and then by “designing” a stochastic algorithm that randomly generates “ice” by drawing from a built-in probability distribution. 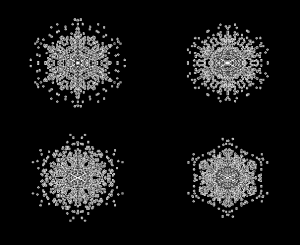 Clearly, applying the Explanatory Filter does not easily allow us to infer design in the second case, but that is not a problem – Dembski does not claim that the ID detecting methods he proposes will not produce false negatives, he only claims a good record for true positives. And in any case, that isn’t what I want to discuss in this post.  I’m not asking people to infer which were designed and which were not.  I know that the second set were designed and the first was not.

(Have a merry Christmas all, by the way!)

At the moment, I’m reading Dembski’s book, Being As Communion. I was interested to see that he uses “teleology” more or less interchangeably with “intelligence”, which is a change from the definition he used to use (“by intelligence I mean the power and facility to choose between options”), and which unambiguously entails the concept of “intention”, something he back then explicitly claimed was outwith the domain of science (I profoundly disagree), only coming “back on the table” after “intelligence” (old definition) has been established.  He also, in Being As Communion, uses “design” in the sense of “pattern” rather than as in “by accident or design”.  So under his current usage, “Intelligent Design” means “Patterns produced by teleological processes”, which I think is actually clearer.

So I am curious now about his view of the difference between what he characterises as “materialism” and his own view (and interestingly, he places Nagel on the same side of this perceived divide).

I think that Dembski would say that, as a materialist, I could avoid the conclusion that my ersatz snowflakes are the result of a teleological process by claiming that they are, nonetheless, the outcome of interactions between matter in my body and brain, and that thus they are not essentially different from the non-teleological snowflake because I am not really an intentional being – my sense of intention is illusory.

Whereas a non-materialist, or at least someone not a priori committed to materialism would say (as I understand Dembski’s thinking here), would regard the second as a special case of a process (teleology) operating within the world in a way that may also be apparent in such phenomena as the Origin of Life, possibly the evolution of the bacterial flagellum, and possibly in the “fine-tuning” of our universe to be life-friendly.

There are a number of things that could be said about this, but the point I want to make in this post, is that I do NOT think that the intentional processes by which I generated the second lot of snowflakes are illusory.  I think there is a real and major distinction between the processes that created the real snowflake and the processes that created the artificial ones (although I will note in passing that often the way we infer artifice, i.e. intelligent design, is that the results are not as complex as the real thing!)

So what is that distinction?  What is the property of teleological processes that makes them different from non-teleological ones?

I suggest that the answer is fairly straightforward:  a teleological process, whether stochastic or under strict control), entails some kind of prior representation (of something to something, possibly itself) of what the end result of the process will be like.  The only advance “representation” of a snowflake is that inherent in the laws and probability distributions that govern its emergence from non-snowflakeness.  Whereas had you stopped me before I’d finished writing my MatLab code and asked me what I was doing (in the middle of the night, when I couldn’t sleep) I’d have told you quite clearly: “I’m trying to write some code that will generate snowflake patterns, and I’m fiddling about with possible distributions my code will randomly draw from trying to find one that tends to the most snowflake like patterns”.

I am, in other words, selecting my actions so as to execute those with the greatest probability of producing an outcome that matches some prior template.

In yet other words, I start by imagining a snowflake, then I set about experimenting, trying things out, rejecting those that don’t work very well, dreaming up different way sof doing it, until I end up with a reliable series of snowflakes.

And even as a so-called “materialist”, that process is very different from the one that produces a real snowflake.  The “intentional” component is not illusory – it can be objectively detected as being present in my actions, and not present in the processes that I hope will give us a White Christmas this year.

Intention, in other word, is perfectly real, and “real teleology”, as Dembski calls it, is perfectly compatible with the view he likes to call  “materialism”.

223 thoughts on “Intention, Intelligence and Teleology”