I’ll be making a presentation at AM-NAT 2016, and Dan Graur will be the poster boy of impractical naturalism. Below are some things I collected from his websites, some of which I view as highly anti-science. The aim of my presentation isn’t to settle the question of God or no God or ultimate questions of whether godless naturalism is the best description of reality. The goal is to suggest there are some unspoken naturalistic creeds that often take priority over experiments and observations. In a manner of speaking, there are some interpretations of naturalism that actually go against dispassionate examination of how the natural world actually operates.

More than a decade after the French Academy of Sciences awarded a prize to Loius Pasteur for his work disproving spontaneous generation, Haeckel objected to Pasteur’s claims on philosophical (not scientific) grounds. From the abstract of my AM-NAT 2016,

The success of NIH initiatives and various other projects has drawn a bizarre reaction from [some] Methodological Naturalists in a way somewhat reminiscent of Haeckel who said in 1876: “If we do not accept the hypothesis of spontaneous generation, then at this one point in the history of evolution we must have recourse to the miracle of a supernatural creation.” The demise of the theory of spontaneous generation led to substantial advancement of practical scientific and medical knowledge as symbolized by the Pasteurization process. In the end, the metaphysical implications of the spontaneous generation debate were peripheral to direct experiment and observation necessary to settle scientific questions.

Because of the falsification of spontaneous generation, the germ theory of disease moved forward and so did medical science as a result. The philosophy of Haeckel didn’t prevail and medical science moved forward, even though, by Haeckel’s own admission, the falsification of spontaneous generation raises the specter of a highly improbable and atypical set of circumstances that led to the emergence of life. Years later, these sets of events were deemed so unlikely that they were said to be “almost a miracle” (to quote Francis Crick).

In the present day, the possibility of large amounts of biochemical function in the genome is drawing a reaction reminiscent of Haeckel’s words. This possibility has been most prominently associated with the work of the NIH ENCDOE project and its follow-on projects RoadmapEpigenomics and possibly E4 (Enabling Exploration of the Eukaryotic Epitranscriptome). From publicly available sources, I estimate the sum investment by the NIH could approach almost 800 million dollars, and there could easily be follow on projects.

But Dan Graur protested, “If ENCODE is right, evolution is wrong.”

No one knows the figure of what percentage of the genome is actually functional. Even if the genome is not as functional as some ENCODE researchers suggest, until we actually know which parts are and which parts aren’t functional, as a working hypothesis, much like searching for a missing person, we have to assume any place we look could bring us closer to finding what we seek. So even if ENCODE’s promoters are ultimately wrong, how can it be damaging to science at this stage of the game if we assume high functionality as a possibility? As a matter of investigative procedure, a medical researcher has to at least assume the stretch of DNA he may be studying may have significance until proven otherwise or until we heal every disease on the planet.

Some argue, “well all that ENCDOE money could be spent elsewhere.” Like where? Cancer researchers and researchers of autoimmune disease want to have data on biochemical activity in cells — even if the activity is not immediately indicative of function, it may be a good diagnostic. That data is provided in painstaking detail by ENCODE and RoadmapEpigenomics. Here is a sample of data cancer researchers use from ENCODE:

The Encyclopedia of DNA Elements (ENCODE) Consortium is an international collaboration of research groups funded by the National Human Genome Research Institute (NHGRI). The goal of ENCODE is to build a comprehensive parts list of functional elements in the human genome, including elements that act at the protein and RNA levels, and regulatory elements that control cells and circumstances in which a gene is active.

The parts list is not completely known. ENCODE data provides hints which researchers can pursue and then contribute to defining the parts list. Want to know how researchers use ENCODE data? How about watching some video from this 3 day conference in 2015. The links to the videos are below. You’ll see medical researcher after medical researcher detailing how ENCODE, Roadmap and GWAS data are helping to develop understanding and treatments for various conditions:

One tally of the ENCODE consortium indicated there were 442 researchers spread out in 32 research centers around the world including top names like Harvard, Yale, MIT, Stanford….you get the picture. Yet it didn’t stop Graur from calling them “ignoramuses”.

My point of contention with Graur? He’s being presumptuous, he could be wrong, and he’s advocating an approach that is not helpful to advancing medical science. Not to mention his style is more becoming of a professional troll than a serious researcher.

I provide some quotes in his own words. And disturbing to me personally is that his anti-ENCODE crusade (not at all based on biochemical experiments) didn’t stop him from getting elected as a fellow of the AAAS recently.

And now, as promised, quotes from Gruar himself.

Ewan Birney, the person most responsible for the ENCODE fiasco
…
he became the scientific equivalent of Saddam Hussein.

the evolution-free philosophy of ENCODE has not started in 2012. The only difference is that Friedrich Vogel was an honest scientist in a world in which disciplines were rigidly compartmentalized. In comparison, no such excuses exist for ENCODE. My only explanation for their continuing existence is that the wannabe ignoramuses, self-promoting bureaucrats, and ol’ fashion crooks of ENCODE are protected from criticism and penalties for cheating by the person who gives them the money. Thus, they can continue to take as much money from the public as their pockets would hold, and in return they will continue to produce large piles of excrement that are hungrily consumed by gullible journalists who double as Science editors.

I visit the NIH once or twice a week to learn and report about what is going on there. Many of the researchers of non-coding RNA care deeply about their work in alleviating human suffering. I mingled with a lot of ENOCDE researchers in 2015 at the conference. The medical doctors and medical researchers among them especially care deeply about their work, some working at hospitals for decades. I take offense at Graur calling them “wannabe ignoramuses” and “old fashioned crooks”.

Graur at a talk at the Society for Molecular Biology and Evolution did this:

Toward the end of the presentation, he [Graur] showed a photograph of dollar bills taped together in the shape of a toilet paper roll—his view of what ENCODE had achieved with the $288 million spent on the project so far. 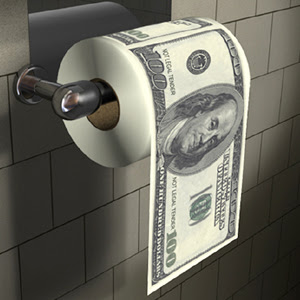 On his website he has a photo of his granddaughter with an extended middle finger and the caption:

and of an MIT researcher

When Exactly Did @ManolisKellis Become a Crook? …. By late 2012, however, Manolis Kellis was unquestionably one of the main propagandist for that insidious pseudo-science project called ENCODE.

I am sick and tired of all the ENCODEites, their apologists, their hired guns, their propagandists, and all the other badly trained technicians who claim that their favorite piece of DNA does not abide by the rules of evolutionary biology.

… If you cannot come with an evolutionary explanation for the evolutionary functionality of your pet molecule, shut up!

To prove that your sequence is functional in a meaningful evolutionary manner, you have show that the sequence is either maintained by purifying selection or by positive selection (or some other type of selection). You cannot base your claims of functionality on performance of a certain biochemical reaction.

So how does one prove functionality via evidence of natural selection? Suppose one is dealing with an Orphan Gene, or Taxonimically Restricted Gene (TRG) or feature, an autapomorphy or whatever you call it, etc.? In such cases it’s kind of hard to apply evolutionary conservation to infer selection.

Since when should an evolutionary narrative take priority over lab-derived experimental analyses of biochemical activity? Shouldn’t evolutionary theory be constrained by biochemical analysis rather than the reverse? Dan Graur is a poster child for an impractical brand of naturalism that is more driven by ideological prejudice than empirical methods. So what “if ENCODE is right and evolution is wrong”? Is there a problem with that?

80 thoughts on “Impractical Naturalism of Dan Graur vs. the NIH”