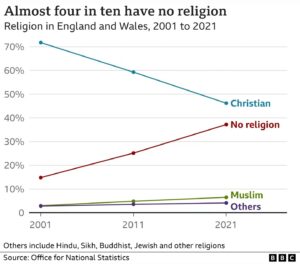 Results from the decennial census show that for the first time ever, fewer than half of English and Welsh citizens identify as Christian. The decline has been precipitous, as shown by the graph.

It appears that most of the Christians jumping ship end up in the ‘no religion’ category rather than converting to another religion. No data on how many of them still believe in a god or gods, or in a ‘higher power’. Also interesting that if established trends continue, the ‘no religion’ folks will become a majority in the not very distant future.

The graph comes from this BBC article.

136 thoughts on “A Milestone (Millstone?) for Christianity in England and Wales”