Let us start by examining a part of the article that everyone can see is horrendous. When I supply proofs, in a future post, that other parts of the article are wrong, few of you will follow the details. But even the mathematically uninclined should understand, after reading what follows, that

Before proceeding, you must resolve not to panic at the sight of Greek letters and squiggly marks in the passage displayed below. Note that although the authors attempt to define a term, you need not know the meaning of the term to see that their “definition” is fubar. First, look over the passage (reading

as “epsilon”), and get what you can from it. Then move on to my explanation of the errors. Finally, review the passage. 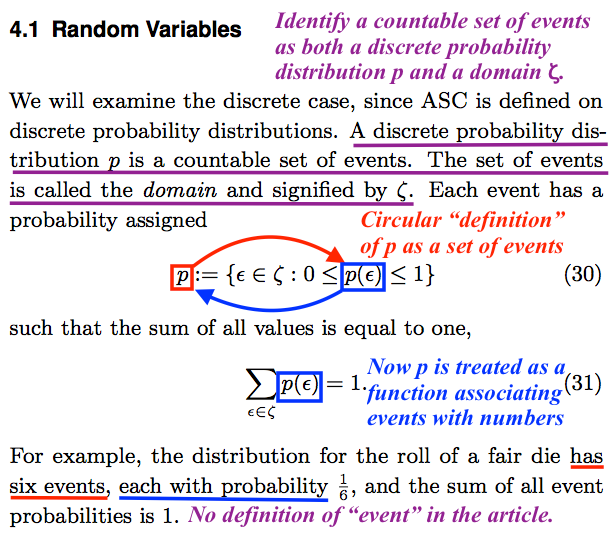 This is just the beginning of a tour de farce. I encourage readers who have studied random variables to read Section 4.1, and post comments on the errors that they find.

However, puzzling over the undefined term event may keep you from fully appreciating the bizarreness of what you are seeing. The authors in fact use the term to refer to elements of the domain. Here is an emendation of the passage, with event defined in terms of domain, instead of the reverse:

[The authors refer to individual elements of the domain as events, though an event is ordinarily taken to be a subset of the domain.]

Next, the authors attempt (and fail) to define

In plain language, Equation (30) says that

is defined as the set of all elements

is a number between

Furthermore, the authors use

inconsistently. With the expression

is defined as the set of all events

with a given property. However, their expression of the property,

is not a set of events, but instead a function associating events with numbers. Equation (31) similarly treats

such that the sum of all values is equal to one,

In plain language, Equation (31) says that the numbers

sum to 1. Now, to gain an appreciation of how horribly confused the authors are, you should ponder the question of how they could use

as a function in (31), associating events

and yet believe that they were correct in defining

as a set of events in (30). In what immediately follows, the authors refer to the probability distribution as though it were both a set of events and a function associating events with numbers:

For example, the distribution for the roll of a fair die has six events, each with probability

and the sum of all event probabilities is 1.

What should the authors have written instead? The answer is not easy for general readers to understand, because I’ve written it as I would for mathematically literate readers. But here you have it:

is a function from a countable set

to the closed interval

of real numbers, with

For example, a roll of a fair die is modeled by distribution

the set of all possible outcomes of the roll.

This says that for each of the elements

with exactly one of the real numbers between 0 and 1. The number in the interval

that is associated with

I have omitted the term domain because the authors never use it. However, to plumb the depths of their incoherence, you need to know that the set

is the domain of the function

Here, to facilitate comparison with what I have written, is a repeat of the annotated passage:

Amusingly, the authors go on to provide examples of discrete probability distributions, in Equations (33) and (38), but misidentify the distributions as discrete random variables.

About one in ten of my sophomore students in computer science made errors like those on display above, so it would be unfair to sophomores to characterize the errors as sophomoric. I have never seen anything so ridiculous in the work of a graduate student, and have never before seen anything so ridiculous in a journal article. It bears mention that Nemati and Holloway were contemporaneous advisees of Robert Marks, the editor-in-chief of Bio-Complexity, as graduate students at Baylor University. Indeed, most of the articles published in Bio-Complexity have former advisees of Marks as authors.