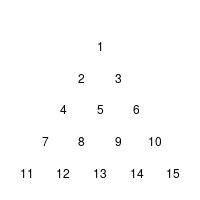 The humble authors1 then describe a simulation of the game to calculate how probable it is to solve the puzzle using moves at random:

A search typically requires initialization. For the Cracker Barrel puzzle, all of the 15 holes are filled with pegs and, at random, a single peg is removed. This starts the game. Using random initialization and random moves, simulation of four million games using a computer program resulted in an estimated win probability p = 0.0070 and an endogenous information of

Naturally, I created such an simulation in R for myself: I encoded all thirty-six moves that could occur in a matrix cb.moves, each row indicating the jumping peck, the peck which is jumped over, and the place on which the peck lands.

And here is the little function which simulates a single random game:

I run the simulation 4,000,000 times, changing the start position at random. But as a result, my estimated win probability was

– only two thirds of the number in the text. How could this be? Why were Prof. Marks et.al. so much luckier than I? I re-run the simulation, checked the code, washed, rinsed, repeated: no fundamental change.

So, I decided to take a look at all possible games and on the probability with which they occur. The result was this little routine:

#pos: boolean vector of length 15 indicating position of pecks
#prob: the probability with which this state occurs
# a move is allowed if there is a peck at the start position & on the field which is
#jumped over, but not at the final position
allowed.moves <- pos[cb.moves[,1]] & pos[cb.moves[,2]] & (!pos[cb.moves[,3]])
if(sum(allowed.moves)==0){
#end of a game: prob now holds the probability that this game is played
nr.of.pecks <- sum(pos)
#number of remaining pecks
cb.number[nr.of.pecks] <<- cb.number[nr.of.pecks]+1
#the number of remaining pecks is stored in a global variable
cb.prob[nr.of.pecks] <<- cb.prob[nr.of.pecks] + prob
#the probability of this game is added to the appropriate place of the global variable

I now calculated the probabilities for solving the puzzle for each of the fifteen possible starting positions. The result was

This fits my simulation, but not the one of our esteemed and humble authors! What had happened? 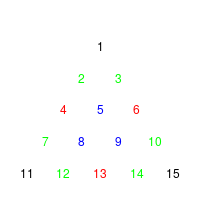 I found it odd that the authors run 4,000,000 simulations – 1,000,000 or 10,000,000 seem to be more commonly used numbers. But when you look at the puzzle, you see that it was not necessary for me to look at all fifteen possible starting positions – whether the first peck is missing in position 1 or position 11 does not change the quality of the game: you could rotate the board and perform the same moves. Using symmetries, you find that there are only four essentially different starting positions. the black, red, and blue group with three positions each, and the green group with six positions. For each group, you get a different probability of success

One quite obvious explanation for the result of the authors is that they did not run one simulation using a random starting position for 4,000,000 times, but simulated for each of the four groups the game 1,000,000 times. Unfortunately they either did not cumulate their results, but took only the one of the results of the black or the red group (or both), or they only thought they switched starting positions from one group of simulations to the next, but indeed always used the black or the red one.

Is it a big deal?

If the book was actually used as a textbook, the simulation of the Cracker Barrel puzzle is an obvious exercise. I doubt that it is used that way anywhere, so no pupils were annoyed.

It is somewhat surprising that such an error occurs: it seems that the program was written by a single contributor and not checked. That seems to have been the case in previous publications, too.

Perhaps the authors thought that the program was too simple to be worthy of their full attention – and the more complicated stuff is properly vetted. OTOH, it could be a pattern….

Well, it will certainly be changed in the next edition.

54 thoughts on “Prof. Marks gets lucky at Cracker Barrel”