This is the third and last of my answers to Jonathan Wells’ 10 unanswerable questions for evolutionists.

Wells: Why do textbooks define homology as similarity due to common ancestry, then claim that it is evidence for common ancestry — a circular argument masquerading as scientific evidence?

This question stems from confusion on Wells’ part between how something is defined and how it is recognized, which are two quite different things. Homology is indeed defined as similarity due to common ancestry. But we don’t just label any similarity a homology and call it evidence for common ancestry. That would indeed be circular. What we really do is quite different. Similarity between the characteristics of two organisms is an observation. If the similarity is sufficiently detailed (“both are big” or “both are green” won’t do) we consider it a candidate for homology.

Homologies can be tested to some degree by predicting that the characters will be similar in ways we haven’t yet checked. For example, if we propose that similar-looking bones in two animals are homologous, we might predict that they would arise from similar precursors in the embryo, have similar spatial relationships to other bones in the organism, and have their development influenced by similar genes. And this is commonly the case.

But the main way of testing candidate homologies is by congruence with other proposed homologies. By congruence we mean that the two characters can plausibly belong to the same history. If the history of life looks like a tree, with species related by branching from common ancestors, then all true homologies should fit that tree; that is, each homology should arise once and only once on the tree. If a large number of functionally and genetically independent candidate homologies fit the same evolutionary tree, we can infer both that the candidates really are homologies and that the tree reflects a real evolutionary history.

And in fact that’s what we commonly find. Mammals, for example, are inferred to descend from a common ancestor because they all have hair, mammary glands, and other more obscure characteristics like seven neckbones and three earbones. All these characteristics go together: mammals have all of them and no other animals have any of them. Further, other characters support consistent groupings within mammals, and groupings within those groupings. Within most of life, groups are organized in a very special way called a nested hierarchy. In a nested hierarchy, every group is related to every other group in one of two ways: either one group entirely contained within the other (as in a below), or they share no members at all (as in b below). No two groups can partially overlap (as in c below).

What we see if we try to organize species using candidate homologies is that groups organized according to different characters fit together like a and b, but not c, so we get a pattern like this:

Why should these and many other characters all go together in this consistent way? Evolutionary biology explains these characters as homologies, all evolved on a single tree of descent, like this: 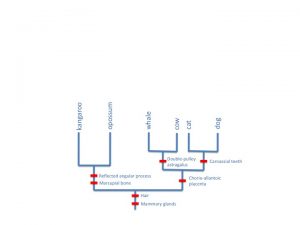 Wells gives no alternative explanation for such patterns, and indeed they are hard to explain in any other way than as reflections of an evolutionary history. Wells has it all wrong. Homology isn’t a circular argument, it’s a branching tree of evidence.

77 thoughts on “Jonathan Wells and Homology”