Since I’ve been asked, I’m posting another of my answers to the 10 unanswerable questions for evolutionists in Jonathan Wells’ book Icons of Evolution.

Why do textbooks portray this fossil as the missing link between dinosaurs and modern birds — even though modern birds are probably not descended from it, and its supposed ancestors do not appear until millions of years after it?

What does Archaeopteryx have to be to qualify as a “link” (not a missing link, because it isn’t missing)? Wells apparently (he never really says) requires an insensible gradation of ancestors and descendants leading from an unquestioned dinosaur to an unquestioned bird, with Archaeopteryx in the middle. While that would be nice, it’s hardly necessary — and considering the quality of the fossil record, that’s lucky.

How likely are we to find direct ancestors of living species in the fossil record? That depends on the quality of the fossil record. If we have found most of the extinct species that ever lived, our chances are good; on the other hand, if our knowledge is spotty, our chances are bad. We can judge the quality of the dinosaur fossil record based on the species we have found so far. Half of all known dinosaur genera are known only from a single specimen, which suggests that there are many more genera for which not even that single specimen has yet been found. Moreover, many of the genera with multiple specimens are known only from a single time and place. We have seven specimens of Archaeopteryx, all from a single limestone quarry in Germany. Archaeopteryx is the only known Jurassic bird. How likely is it that the single Jurassic bird we happen to have found is the ancestor of all subsequent birds? Given the small sample we have, we are unlikely to have found the ancestors for most dinosaur groups, including birds. Fortunately, we often can find fossils that are not too far removed in time and appearance from those ancestors. Archaeopteryx is one such fossil. It probably isn’t the ancestor of birds. (Distinguishing actual ancestors from cousins of the ancestors is itself an unsolved problem.) But it does represent a key transitional stage between theropod dinosaurs and modern birds. It has some features of theropods, some of birds, and others that are in between. Wells offers no explanation for the transitional nature of Archaeopteryx. We have other fossils for both more primitive and more advanced transitional stages. Some of the more primitive transitional stages — Velociraptor, for example — lived later than Archaeopteryx. Such are the vagaries of preservation. Nobody claims that ancestors appeared after their descendants, only that we have sampled a big family of cousins and siblings at random points through time, some of whom (like Velociraptor) resemble their common ancestor more closely than others (like Archaeopteryx). 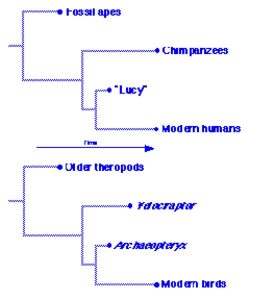 A comparison may be helpful in understanding this point. On the top of the figure above is a tree showing human relationships. Dots at some points in time represent species we know about. We have a number of fossil apes, most over 10 million years in age. We also have a number of fossil hominids, of which Australopithecus afarensis, represented by “Lucy”, is perhaps the most famous and has often been mentioned as a possible human ancestor. While it’s not clear whether A. afarensis is or isn’t a direct human ancestor, it’s definitely not too far from that line. The next closest human relatives are the chimpanzees. Chimpanzees have no known fossil record. Someone might try to cast doubt on this human phylogeny by claiming that modern humans are probably not descended from Lucy, and her supposed ancestors (meaning chimpanzees) do not appear until millions of years later. Of course, there are other, earlier fossil apes, but they are much farther from humans than are chimpanzees. Nobody actually makes this argument, probably because we easily recognize it as ridiculous, equivalent to the question, “If humans are descended from apes, why are there still apes?” You don’t even have to accept human evolution to realize that question is silly. But Wells’ question about Archaeopteryx is exactly the same. We’re not sure if Archaeopteryx is a direct ancestor of modern birds, but it’s not far from that line. The theropod dinosaurs that Wells calls Archaeopteryx’s “supposed ancestors”, like Velociraptor, are merely the closest known relatives of Archaeopteryx, and stand in the same relationship to it that chimpanzees do to Lucy: later in time yet more primitive. And of course there are plenty of earlier, even more primitive theropod relatives. We know that the fossil record is incomplete, and it’s incomplete for both birds/dinosaurs and humans/apes. The fit between the actual fossil record and our natural expectations that primitive characters will appear earlier than advanced characters is surprisingly good, but it’s not perfect; as in these two cases, some fossils we would like to see have not been found. But enough have been found to give us a clear picture, at least in outline, of both human and bird evolution. “Lucy” and Archaeopteryx don’t have to be directly ancestral to make important contributions to those pictures.

72 thoughts on “Jonathan Wells and Archaeopteryx”