Below is an image of the developmental path from human conception to adult in comparison with evolutionary path from prokaryote to human. 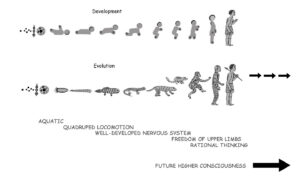 Unlike Haeckel’s biogenetic law with its focus on physical forms, the comparison above also concerns activity, lifestyle and behaviour. Comparative stages may be vastly different in detail, but the similarity of general lifestyles and consecutive stages are there to be observed.

Human life begins in an aquatic environment. Toddlers gradually learn to walk upright from a previous state of crawling and moving around on all fours. The brains of children develop through daily interactions and experiences. This brain development accompanies the child’s increasing ability to achieve complex manipulation skills using hands that have been released from the task of providing support and locomotion, and also the practice of producing sounds using the various muscles of the mouth. Well developed brains allow for rational thinking and the creative use of language.

Human minds have brought about technological advances which have allowed human activities to engulf the planet. Signs of intelligent human activity are evident a good distance beyond the earth spreading ever further out into space.

The various forms of extant animals and all other life forms have evolved as an integral component of the living earth and the whole forms a dynamic system.

The various animal forms should be studied in the context of the complete system in both time and space.  Conditions would have been very different prior to the terrestrial colonization of earthly life In all probability none of the present aquatic animals would bear any resemblance to the aquatic ancestors of humans and other higher vertebrates save that at some stage they all require an aquatic environment for their continued existence.

From a point of view which regards physical organisms as the individual expressions of overarching general forms, the evolution of cetaceans need not have involved moving to the land only to return to the water at a later time. They may have reached the mammalian stage of evolution but in a way that was suitable for an aquatic lifestyle. They adopted the archetypal mammalian form in a way that suited an animal living in an aquatic environment and there would be no need to posit a terrestrial stage in their evolution.

It’s my belief that higher consciousness is ever present. Evolution is the process whereby higher forms of consciousness descend from the group level to the individual level. The most fully developed individual consciousness which I am aware of on earth can be found in humans but it is still rudimentary compared to the higher level group consciousness.

Plasticity is a fundamental feature of living systems at all levels from human brain development to the radiation of multicellular life. Paths are formed by branching out and becoming fixed along certain lines. It would be impossible to forecast specific paths but, nonetheless, there is a general overall direction.

Now that biological life has reached the stage where social organisms have become individually creative and rational, the all encompassing Word is reflected in single beings. This could not have come about without preparation and the evolution of earthly life is the evidence of this preparation. We, as individuals, are only able to use language and engage in rational thinking because our individual development has prepared us to do so. Likewise humanity could not arrive at the present state of culture without the evolutionary preparation in its entirety.

Focussing in at the lower level gives a picture of ruthless competition, of nature “red in tooth and claw”. But from a higher vantage point life benefits from this apparent brutality. For instance if a sparrowhawk makes regular hunting visits to a suitable habitat in your neighbourhood it signifies that this environment supports a healthy songbird population. In the case of the continued evolution of physical forms, survival of the breeding population is more important than any individual’s survival. In the evolution of consciousness the individual is the important unit.

I think it is a mistake to see biological evolution as a blind random groping towards an unknown and unknowable future.

896 thoughts on “Evolution Reflected in Development”