It turns out that professor Larry Moran of the University of Toronto agrees with Craig Venter. Thanks to Allan Miller, I discovered a blog on a similar theme at sandawalk link here

This is what professor Moran says about the video (his video is 42 min long):

” Everything that Ventor says is correct. He didn’t need to quibble about the universality of the genetic code but it’s true that there are variants.”

“I’m pretty sure that Dawkins doesn’t agree (in reference to video) with those who question whether there’s a tree of life. One of the most profound implications of the net of life is that it’s consistent with several independent origins of life that preceded the rise of a modern genetic code and contributed to existing species. In other words, there may not be a single LUCA (Last Universal Common Ancestor). Dawkins does not like that. It’s not what he says on the lecture circuit.” (my emphasis)

There is probably no one in the world of biology today as respected as Craig Venter.

Well, his achievements are indeed great including being involved with sequencing the human genome and assembled the first team to transfect a cell with a synthetic chromosome, which some even went as far as calling the creation of artificial life…

Now apparently, he is involved in the anti-aging research…no surprise here…he is 70 and would like reach immortality like the jellyfish…Who can blame him…He is an atheist…

However, his also known for what some would call radical statements such as denying the common descent which is the very foundation of evolutionary theory…

Here is what he says on the theme:

While some may object that this is an old and recycled subject, I would argue that to claim that, one would have to present the evidence that Venter’s claims have been refuted since…

However, in view of my recent OPs The Mystery of Evolution # 6 especially, it doesn’t look like the issue of common ancestry has been resolved at all…The genes are still not accounted for and the proposed mechanism for the endosymbiosis seems sketchy… if not miraculous…

If anything, the supposed common ancestry got more complicated on the much deeper and deeper level in the history of life and no wonder that Venter claims that:

Venter: “…I’m not so sanguine as some of my colleagues here,” he said, “that there’s only one life form on this planet. We have a lot of different types of metabolism, different organisms. I wouldn’t call you [Venter said, turning to physicist Paul Davies, on his right] the same life form as the one we have that lives in pH 12 base, that would dissolve your skin if we dropped you in it.”

What does he mean by this? Is there more then one form life on earth?

Davies “Well, I’ve got the same genetic code, “We’ll have a common ancestor.”

Venter: “You don’t have the same genetic code,” replied Venter. “In fact, the Mycoplasmas [a group of bacteria Venter and his team have used to engineer synthetic chromosomes] use a different genetic code that would not work in your cells. So there are a lot of variations on the theme…”

Davies: “But you’re not saying it [i.e., Mycoplasma] belongs to a different tree of life from me, are you?”

Venter: There Isn’t a Tree of Life

“The tree of life is an artifact of some early scientific studies that aren’t really holding up…So there is not a tree of life.”

What Venter was talking about” is as good, if not better today, and it will look even better in the not that distant future…I can assure you of that… 🙂 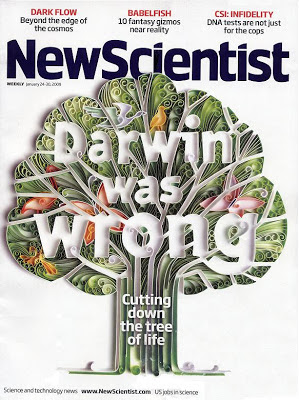 More on the theme:

Uprooting the Tree of Life

Is the Bush of Life the answer? Venter says “…there may be a bush of life…” 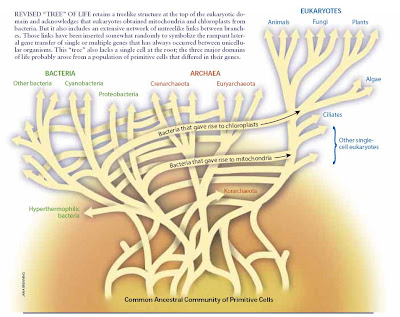 Or is there a forest or orchard of life with many independent roots?

Has the base of the bush or orchard of life been a single root?

75 thoughts on “The Mystery of Evolution: 8. Common Descent-The Tree of Life or a Bush? An Orchard?”