Note: I have changed the title of this post for the benefit of readers who are unfamiliar with the term ‘substance dualism’.

Many of our readers – especially among the regulars at Uncommon Descent – are substance dualists.  That is, they believe that each of us has an immaterial mind or soul that constitutes our true self, and that the body, including the brain, is merely a vehicle “inhabited” and controlled by the mind or soul.

There are many problems with this idea, which is why it is rejected by most neuroscientists and philosophers.  One of the most striking is the problem posed by the strange characteristics of split-brain patients, as described in this video by VS Ramachandran: 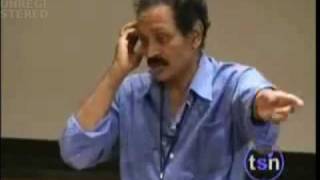 Not only do the separate hemispheres exhibit distinct personalities and beliefs, as Ramachandran explains; they even have separate wills.  I described this in a comment at UD a few years ago:

Even stronger evidence against the dualist position is provided by split-brain patients. There is a procedure, the corpus callosotomy, that disconnects the two hemispheres so that epileptic seizures cannot spread from one to the other. The hemispheres are only disconnected; neither is removed. This operation contains the seizures, dramatically improving the patient’s quality of life, but it also severs the path through which the hemispheres normally communicate. The results are fascinating, and they’re not very friendly to the dualist position:

a. In experiments with split-brain patients, it’s possible to pass information to one hemisphere but not the other. The left hemisphere literally doesn’t know what the right hemisphere knows, and vice-versa.

If there were a single, immaterial mind, it would know what both hemispheres know. Clearly, this doesn’t happen. As a dualist, how do you explain this? Surely the immaterial mind doesn’t split in two at the moment the corpus callosum is cut, does it?

These fascinating videos of a split-brain patient demonstrate the phenomenon:

b. The left hemisphere controls the right half of the body, and vice-versa. When the connection between the two is cut, this results in bizarre behaviors indicating the presence of two “wills” in the same skull.

One patient was seen to pick up a cigarette with her right hand and place it in her mouth. Her left hand plucked it out and threw it away before the right hand could light it.

In another case, a man attacked his wife with one arm while defending her with the other.

If a single immaterial mind were running the show, this would not happen. How do you explain this within the dualist framework?

The question is just as relevant now as it was then.  Dualists, how do you reconcile these phenomena with your worldview without twisting yourselves into logical pretzels?