One of the strangest doctrines in all of Christianity is the doctrine of the Trinity. This doctrine holds that there are three divine persons — the Father, the Son, and the Holy Ghost — yet only one deity. Each of the three persons is fully God, and not just a part of God. A famous diagram known as the “Shield of the Trinity” compactly summarizes the idea: 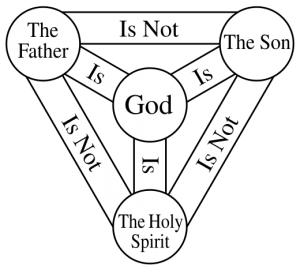 The Trinity doesn’t make much sense, and many Christians recognize this. What most of us would call absurd they call a mystery, meaning something that is known to be true through revelation but cannot be demonstrated by mere human reason.

Some questions for the Christians out there:

1. Do you accept the doctrine of the Trinity?
2. Do you recognize the absurdity of it?
3. Do you deal with the absurdity by declaring it a “mystery”?

309 thoughts on “Questions for Christians and other theists, part 8: the Trinity”