During recent discussions on phylogeny, we saw a distinct failure to communicate, probably felt by both sides. The ‘evos’ attempted to consider the role of molecular data in determining relationship. Given that an obvious cause of common sequence is common descent, due to the significant but not perfect fidelity of the DNA replication process, the phylogenetic inference is that sequence similarity is indicative of common descent. This, critics feel, is a circular argument.

In this, they may be following Jonathan Wells in Icons of Evolution. His criticism is that “homology is inferred from common ancestry, then turned around and used as evidence for common ancestry”. Yet in molecular genetics, the term ‘homology’ tends to be used to indicate sequence similarity alone, not a descent relationship. DNA probes and separate-strand annealing rely upon ‘high homology’, meaning only complementary sequence. The similarity is an observation, not an inference. If one had two sequences, XXXXXXXY and XXXXXXXZ, they certainly aren’t inferred to be similar: they really are similar. The retention of similarity (with variations) in a line of descent is also an observation. It is not clear to me where the circularity comes in in putting those two observations together and inferring that sequence similarity is supportive of common descent. Particularly when other sites are brought in to the analysis. Each site verifies the assumption for the other(s); Creationists on the other hand lump the whole into a composite sequence, and expect ‘independence’ to come from something other than sequence identity. You can’t verify genes using genes, or something.

Well, if the argument is circular, we must apply that razor to within-species comparisons as well – paternity testing, forensics, molecular genealogy and ethnic investigations must all be based upon circular reasoning too. Which I suspect no-one would try and argue in court. Broadening this out to between-gene-pool sequence similarity, among species that are even termed ‘closely related’, we presumably don’t have a major problem with sequence being commonly derived from a common ancestor there either. So the question is: as one goes ‘upwards’ in the Linnaean classification system, where does the circularity arise, if it is not there throughout? The differences identified between higher taxa are inevitably greater than those at lower, as one would expect from the same process of descent with modification that explains similarity among relatives, extended in time. As time goes on, the similarities erode and the differences increase. But there is no boundary detectable, no clear transition at which ‘circular reasoning’ comes in, nor where there is an abrupt difference as would be expected from separate origins. Differences remain a matter of degree, albeit confounded by rare events and inevitable statistical artefacts.

The Creationist alternative for sequence similarity is ‘Common Design’. I confess I can never make any sense of this. At what point does Common Descent stop and Common Design take over? In a process whereby a Designer generated in initial version of a sequence, and then allowed nature to take its course, the similarities between subsequent lineages would actually be due to Common Descent, not the initial Design.

OK, we might propose a Designer making separate taxa. The similarities in sequences between any two such taxa could be termed Common Design. But members of Taxon A and Taxon B are still commonly descended from that point on, from the moment of creation. So you can never separate out Common Design completely from Common Descent. In any process where similarities were initiated by Common Design, residual within-taxon similarities still indicate Common Descent from those points. The exact same kind of data has two completely different explanations across that assumed boundary, which is extravagant and inconsistent. The boundary is not a real boundary in the data.

If we follow the differences in Taxons A and B back, attempting to reverse out evolutionary history, we get to a point where the ‘ur-sequences’ exhibit a high degree of sequence similarity. Something which, if we observed it today, would strongly support a genetic relationship. So what would persuade us that, at that point in history, the relationship was not, in fact, genetic?

Common Design is sometimes invoked as ‘like creatures need like DNA’. But if we envisage the Design occurring at a high enough taxonomic level, we are saying that some very unalike ‘creatures’ had like DNA, at the moment they were … created. They only have unalike DNA now, after a few million years of separate change.

Further, none of this helps explain genetic similarities at loci that have little to do with phenotypic difference. One of the principal markers used in paternity testing are SINEs – a kind of transposon. Intergenic examples have no apparent phenotypic effect, and vary in humans (obviously, or they’d be no use). But there are also SINE inserts that are held in common between humans and chimps, others that are diagnostic at still higher taxonomic levels. They can’t all be essential to the form of the members of the clade they are restricted to – can they?

I’ve taken a somewhat circuitous route to my point, and the reason for the title. Consider the following not-very-treelike tree. 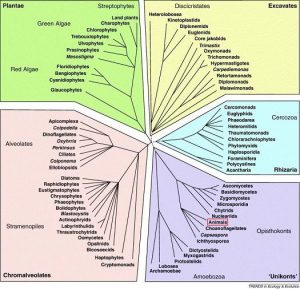 It represents the result of extensive phylogenetic analysis of the entire eukaryote clade. Reminiscent of those ‘you are here’ pictures of the Milky Way, ‘animals’ are all stuffed in the red box at bottom right. That’s everything: vertebrates, insects, sponges, nematodes … Fungi are just above, and land plants, seaweeds and Volvocales at about 11 o’clock. That’s pretty much it for multicellular life. The tree overwhelmingly consists of unicellular eukaryotes of bewildering diversity – what used to be called protists, and still are when we aren’t being cladistically rigorous. Never mind beetles, thats what the designer has an inordinate fondness for! If we had no place on this tree, I suspect people would have no problem with it, or the methods used to infer it. Of course we notice the multicellular life more than anything else. They’re bigger. It’s us, it’s our pets, food, materials and enemies. But most of the tree is minute, and does not indulge colonial clumping, amendments of which cause the ‘mechanical impossibility’ arguments ranged against phylogeny.

The discussions involved in resolving and testing these ‘protistan’ branches are surprisingly heated. It’s not just a question of assuming a relationship; the relationships are teased out of the data. If there were no relationship, that too would be apparent from the data. So where, in the progression to the interior of this diagram, and trying not to be bamboozled by the contents of that little red box, does circular reasoning come into it? Likewise, where does Common Design take over from Common Descent as the cause of similarity?

415 thoughts on “Phylogeny – the Bigger Picture”