… proved without reference to infinity and the empty string.

Some readers have objected to my simple proof that computable transformation

of a binary string

can result in an infinite increase of algorithmic specified complexity (ASC). Here I give a less-simple proof that there is no upper bound on the difference in ASC of

To put it more correctly, I show that the difference can be any positive real number.

Updated 12/8/2019: The assumptions of my theorem were unnecessarily restrictive. I have relaxed the assumptions, without changing the proof.

the set of all binary strings. For all

the algorithmic specified complexity of

is an element of

is a distribution of probability over

is the algorithmic complexity of

be a constant function on

be a positive real number. There exists a distribution

[12/8/2019: To generalize, replace the first two sentences of the theorem with the following: Let

be an element of

be a computable function on

In the case of 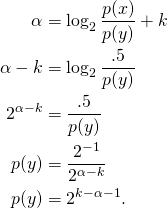 is precisely equal to

if and only if

and is strictly less than

over the nonempty set

In the case of

and similarly solve for