The immaterial soul, at least as most theists conceive of it, does not exist.  There is an abundance of evidence for this assertion, but I have focused recently (both here and at UD) on observations of split-brain patients in particular. 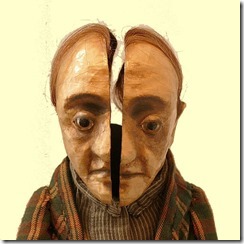 My argument, in a nutshell, is that split-brain patients have two minds in one skull.  The left hemisphere can believe, know, desire, choose, and act on things separately from the right hemisphere, and vice-versa.  Since theists typically attribute these characteristics to the soul, they can only conclude that there are two souls in each split-brain patient – or more sensibly, that the unified soul was a fiction all along.

UD contributor Vincent Torley has responded to my argument here and here.  In essence, his argument is that most dualists do not believe in the kind of soul that is disproven by the split-brain observations.  He attempts to show that these observations can be reconciled with three kinds of dualism:  the well-known ‘substance dualism’, and two lesser-known kinds that he and Edward Feser espouse, respectively.

(By the way, Vincent, I think you need a better name for your version of dualism.  ‘Thought control dualism’ sounds too sinister.

I appreciate the care with which Vincent prepares his arguments, the tone in which he presents them, and his willingness to confront the key issues.  Despite our differences, I think his intellectual style and his appreciation of open debate fit in far better at TSZ than they do at UD.

On to the issues.  I think that most dualists are in bigger trouble than Vincent lets on. They believe not only that the soul has the capabilities I mentioned above, but that it can function independently of the body (after death, for example).  That commits them to substance dualism, which is very hard to reconcile with the split-brain observations.

Vincent, for you the soul seems to be inseparable from the body.  For example, you write

…mind and body (or rather, soul and body) are not two things; rather, the human person is an essential unity.

It should be noted that memory is viewed as a bodily capacity on both versions of dualism being discussed here. Neither account envisages us as having an “invisible information bank” in an immaterial soul, where we keep our memories. Memories, on both accounts, are stored in the brain.

Those quotes seem to indicate that you, unlike most of your fellow theists, do not think that the soul can function independently of the body.  Is that true?  Don’t you think the soul lives on after death? If so, does it lose its memories?

I’ll have much more to say in the comments, but I think this is an appropriate stopping point until you have given us a better understanding of your exact position.

70 thoughts on “More on split brains and souls”