Quite apart from any factual errors, about which I’m not at all qualified to judge, here is what seems to me to be  Meyer’s fundamental logical error IMO:

According to Darwin’s theory, the differences in form, or “morphological distance,” between evolving organisms should increase gradually over time as small-scale variations accumulate by natural selection to produce increasingly complex forms and structures (including, eventually, new body plans).  In other words, one would expect small-scale differences or diversity among species to precede large-scale morphological disparity among phyla.

He illustrates this by asking us to comparing this figure, which he says is what we do see: 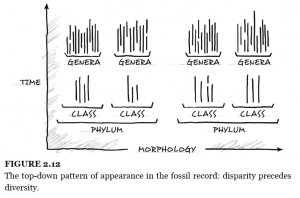 With this (appallingly badly drawn) one:

Which he claims Darwin’s theory says we ought to see.

The actual pattern in the fossil record, however, contradicts this expectation (compare Fig. 2.12 to Fig 2.11b).  Instead of more species eventually leading to more genera, leading to more families, orders, classes and phyla, the fossil record shows representatives of separate phyla appearing first followed by lower-level diversification on those basic themes.

Well, of course it does, Dr Meyer!  You have just, in Chapter 2 of your fat book made an absolutely fundamental error of understanding of the entire principle of phylogenetics and taxonomy.  No, of course you wouldn’t expect phyla to follow “lower-level diversification on those basic themes”.  How could it possibly?  And how could you possibly so fundamentally misunderstand the entire point of Darwin’s tree and its relationship to the nested hierarchies observe by Linnaeus?

All branching events, in Darwin’s proposal, whether the resulting lineages end up as different phyla or merely different species, start in the same way, with two populations where there once was one, and a short morphological distance between them.  It is perfectly true that the longer both lineages persist for, the greater the morphological distance will become.  But that isn’t because they started different, or because the phyla come later.  It’s because what we call phyla are groups of organisms with an early common ancestor,  whose later descendents have evolved to form a group that has a large morphological distance from contemporary populations who descended from a different early common ancestor.

So when a phylum, or a class, or even a kingdom first diverges from a single population into two lineages, the “morphological distance” from the other lineage will be very short.  We only call it a “phylum” because eventually, owning to separate evolution, that distance becomes very large.

I’ve amended the drawings in the book as below, and, instead of labeling the trees by what a contemporary phylogeneticists might have called them, I’ve called each tree a phylum, and I’ve drawn round the organisms that constitute various subdivisions of phyla in colours from orange to green to represent successive branchings.  Rather than the little bunch of twigs marked “families” by Meyer, I’ve indicated the entire clade for each subdivision, or tried to. 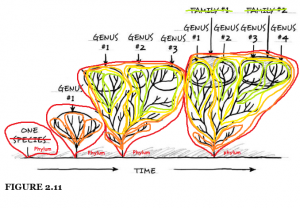 In Meyer’s version, he called the early sprout “ONE SPECIES”, which a contemporary phylogeneticist (Dr Stephen Chordata perhaps) would have called a “species”.  But by the time of the next tree (which I think is supposed to incorporate the first), and Dr Chordata’s distant descendent comes along, she may call it an entire “genus”, and become rather more interested in the “species” that she observes it contains.  Move along one to the next tree on Meyer’s time-line and an even more distantly descendent will call the whole tree a “family” containing “genera” and “species”.  What was a “genus” to her great^10 grandmother will be several genera to her, and so on.  And with each multi-generation of palaeontologist, the descendents of what were close relations in her ancestral palaentologist’s day are now separated by a wide “morphological distance.

So of course, if we look at the fossil record as these speciation-events were happening and try to categorise the organisms in terms of their modern descendents, we will find a great number of different phyla, and far fewer species. Of course they have different body plans, because they lived at a time when many different lineages from the first populations of rather amorphous multi-cell colonies were still around, some with not much symmetry, some with bilateral symmetry, some with five-fold symmetry, and many that didn’t go very far and left no extant lineages.  Because of course Meyer also forgets the big extinction events, which are the other part of the answer to why one particular branch “exploded” while the others were never seen again.  It’s even in his terrible Figure 1.11.  Which he may not have been responsible for drawing, but he should at least have looked at.

ETA: the other drawing, fixed:

Another extraordinary example of Meyer’s complete failure to understand what a clade is, or that the words “phyla” and “class” refer to clades. Coloured emendations are mine (orange/red for Meyer’s “phyla”, blue for Meyer’s “class”):

I’d have expected an urbane, Cambridge-educated guy like Meyer to [ETA: spot the erroneous] singular of “phyla” but that’s minor compared to his crashing howler of an attempt to demonstrate what the term means.

ETA:3 Note: As Mung has pointed out, Meyer shows that he does know the singular of “phyla”, he just doesn’t get it correct it in this particular diagram. However, as I have said elsewhere (and above), this error is minor compared with the howler of including only a group of of descendents in his circled “phyla”, not the whole branch, which as I’ve said, undermines his entire argument.