On Thursday 10/18/18 John Sanford presented at the prestigious Mazur Auditorioum of the National Institutes of Health: 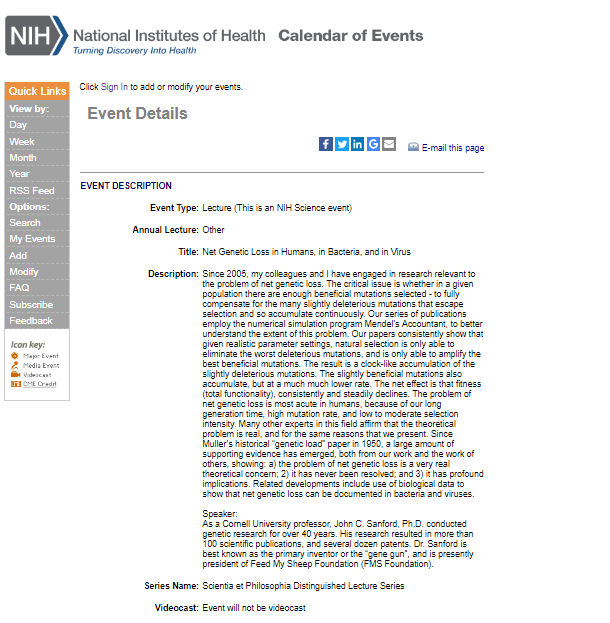 Recordings are being edited, formatted and finalized and will be, God willing, released in due time.

On 10/19/18 the next day John and I conferenced with Kirk Durston, the lead author of the following paper which lays some of the ground work for one of the purposes of the nested hierarchy in biology which is makes discovery of 3D protein structure because of the patterns of sequence diversity and similarity.

Much progress has been made in understanding the 3D structure of proteins using methods such as NMR and X-ray crystallography. The resulting 3D structures are extremely informative, but do not always reveal which sites and residues within the structure are of special importance. Recently, there are indications that multiple-residue, sub-domain structural relationships within the larger 3D consensus structure of a protein can be inferred from the analysis of the multiple sequence alignment data of a protein family. These intra-dependent clusters of associated sites are used to indicate hierarchical inter-residue relationships within the 3D structure. To reveal the patterns of associations among individual amino acids or sub-domain components within the structure, we apply a k-modes attribute (aligned site) clustering algorithm to the ubiquitin and transthyretin families in order to discover associations among groups of sites within the multiple sequence alignment. We then observe what these associations imply within the 3D structure of these two protein families.