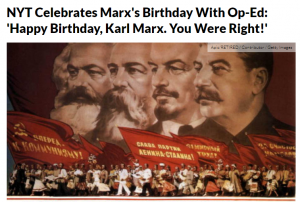 Yes – yes… OK – let us all agree that the term “Cultural Marxism” has been misappropriated by silly conspiracy theorists, particularly by the “alt-right” – whatever that term is supposed to mean. That said, Cultural Marxism still remains a real phenomenon – a legacy of postmodernism and “Critical Theory” – a legacy most foul and murderous and championed by USEFUL IDIOTS!

Useful idiots? … those would include those demonic professors who cut their teeth during the student riots of 1968. Virtue-signally professors who still enjoy playing Pete Seeger folk songs – Seeger, that nostalgic Stalinist who released an embarrassingly ill-timed and quickly recalled album titled “Songs of John Doe” – an album which PRAISED the Molotov–Ribbentrop Pact! Bastard! Sons-of-a-Bitch! Pete Seeger and all like him can rot in Hell!

Useful Idiots? … A Pox on all of you who would celebrate May 1 and sing the Internationale! Yes! Go to Hell, all of you! Even you, who may be too embarrassed to sing the Internationale and sing instead Cultural Marxism’s new anthem – John Lennon’s song “Imagine”. Yes! Imagine even how virtue-signaling BDS SJWs who persist in singing that Lennon song, echoing in the same streets, but a generation ago, with the same the resounding resonance of the Horst Wesel Lied. Imagine BDS SJWs, who share the same Jew-Hatred of those very terrorists still attacking even as we speak, innocent victims in cities across Europe – Yes! … and witness our European leaders even singing that John Lennon song, while marching arm-in-arm over paving stones freshly spattered with the blood of innocent victims – victims to Jew-hating terrorists… a hatred shared by Cultural Marxism.

Yes indeed – today is May 1 – a day to commemorate the victims of Marxism both past, present and future. Rot in Hell – all of you who take pleasure in celebrating whatever this day stands for.

Let us pray that all universities be purged of Humanity Departments – indoctinators of Cultural Marxism – destroyers of civilization – groomers of sex-offenders and desecrators of all Western Culture holds dear. The pseudo-atheist anti-Semitic Cultural Marxist indoctrination of the Left must be extirpated once and for all.  Amen!

139 thoughts on “Commemorating May 1”