I am an atheist. I do not believe that any gods exist.

Being an atheist does not mean that I claim to have knowledge or proof that no gods exist. I have simply never encountered any objective, empirical evidence for the existence of any entity that fits the definition of “god”. If I were provided with such evidence, I would provisionally accept that at least one such entity exists.

Atheism is not a stronger variant of agnosticism. It is simply a lack of belief. Knowledge and belief are orthogonal concepts: 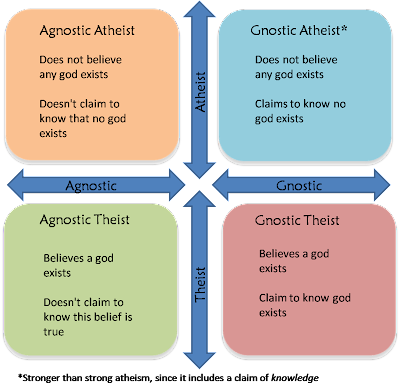 The word “atheist” has social stigma. Some people characterize their lack of belief as agnosticism to avoid offending their family and friends. That doesn’t change the fact that if you lack belief in a god you are, by definition, an atheist. You might also be an agnostic, but that’s a separate issue.

The only way to eliminate the stigma is to show the people we care about that belief in gods is not required to be a good spouse, parent, child, friend, or neighbor.

I am an atheist. If you don’t believe in a god or gods, you are too.

Thanks to Alan Fox for suggesting this topic.