A row is ready to erupt over two competing notions of ‘design in nature.’ One has been proposed under the auspices of being a natural-physical law. The other continues to clamour for public attention and respectability among natural-physical scientists, engineers and educators, but carries with it obvious religious overtones (Foundation for Thought and Ethics, Wedge Document and Dover trial 2005) and still has not achieved widespread scholarly support after almost 20 years of trying.

One the one hand is the Discovery Institute’s notion of ‘design in nature,’ which is repeated in various forms in the Intelligent Design movement. Here at TSZ many (the majority of?) people are against ID and ID proponents’ views of ‘design in nature.’ The author of this thread is likewise not an ID proponent, not an IDer. On the other hand is Duke University engineering and thermodynamics professor Adrian Bejan’s notion of ‘design in nature’ (Doubleday 2012, co-authored with journalism professor J. Peder Zane), which rejects Intelligent Design theory, but contends that ‘design’ is nevertheless a legitimate natural scientific concept. Apropos another recent thread here at TSZ, Bejan declares that his approach “solves one of the great riddles of science – design without a designer.” 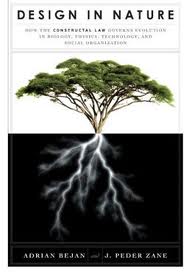 Here is what Bejan says about ‘design in nature’ and his ‘constructal law’ of physics:

“The constructal law is not headed toward a creationist argument, and in no way does it support the claims of those who promulgate the fantasy of intelligent design [sic]. Anyone who takes excerpts from this book to suggest that I am arguing for a spiritual sense of ‘designedness’ is engaging in an intentional act of dishonesty.” (2012)

For a further comparison of these two different notions of ‘design in nature,’ see here:

I’m curious to hear how people at TSZ compare and contrast these two notions of ‘design in nature,’ if you think there is hope for Bejan’s ‘law’ and what it means for the Discovery Institute’s ‘design’ + ‘intelligence’ = ‘designer/Designer’ argument.

Could I also make a simple survey request that those who might wish to comment on this thread would say up-front whether or not they had heard of Adrian Bejan and his ‘design in nature’ or ‘constructal law’ approach before reading this post?