Baraminology and the Flood

Presented for your amusement as a relief from all the very deep philosophy: a fine example of the cargo cult science of young-earth creationist baraminology. That label “cargo cult science” refers to attempts to ape the surface features of science, perhaps in hopes of gaining a similar degree of prestige. Think of Ann Gauger in a white lab coat, standing in front of a green screen.

Our example today comes from Kurt Wise, perhaps the most famous of the scientifically trained creationists — Harvard degree in paleontology with no less an advisor than S. J. Gould. Specifically, this publication:

As we shall see, one of the attributes of cargo cult science is the very careful handling of assumptions; their implications must be considered only in so far as they contribute to the desired conclusion, and any inconvenient consequences must be ignored. Wise actually does better than most, and is willing to let the data take him farther than most, but not so far as to endanger his beliefs.

The central task of baraminology, and the one that has most interested me, is the attempt to identify the created kinds. Wise proposes a novel method for this using the fossil record. But first, some assumptions, which must be granted for the sake of argument.

We must first suppose the literal truth of the entire Genesis story, including a strict timeline. Life, including all the kinds, was created over a week about 6000 years ago. These various kinds contained the potential to develop — one should not say “evolve: — into a great many species very quickly, which they proceeded to do. Around 1500 years later, there was a great Flood that covered the world, killing all terrestrial animals (at least) other than those preserved by Noah on the Ark. And Noah carried a few individuals of one species of each created kind; thus each kind suffered a severe bottleneck in the Flood: not only was each species reduced to a few individuals, but each kind was reduced to a single species.

Directly after the flood, the kinds re-diversified into new species (or quickly went extinct, in many cases). Traditionally in baraminology, the kind has been roughly identified with the family, thus the cat kind is considered to include lions, cheetahs, domestic cats, etc., 30+ living species and a fair number of extinct ones, all from an original pair of cats on the Ark. (Wise is willing to go much further than that, as we will see.)

There are also a number of assumptions about the stratigraphic record. The record can be divided in two: Deposits of the Flood, including the entire Paleozoic and Mesozoic and unspecified portions of the Precambrian, and deposits of the post-Flood, the Cenozoic. The K-T boundary represents the end of the Flood. Within these strictures, Wise accepts the worldwide correlation and sequence of rocks. It just all happened a lot faster than mainstream geologists think. And here’s the timeline, a combination of Wise and other papers in the same volume. Deposition gradually decreases in rate as time goes by, slowing to roughly modern rates around 650 years after the Flood, and the entire Tertiary is compressed into that time. 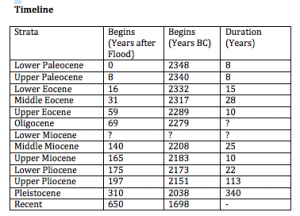 Wise’s final assumption is that the fossil record is very close to complete, at least at the level of mammal kinds.

This results in some interesting developments. The approximate level of the kind is not the traditional family but superfamily and suborder. For example, Wise considers Feliformia and Caniformia to be single kinds. The former includes cats, mongooses, civets, and hyenas, while the latter includes dogs, bears, weasels, raccoons, and, most interestingly, seals. By similar reasoning, he also supposes that whales are descended from terrestrial mammals aboard the Ark. This is much more evolution — sorry, diversification — than most creationists are willing to swallow. Wise, to his credit, doesn’t shy away from that.

Now, there is one group excluded from this method. Can you guess which one? Yes, it’s humans. Wise supposes that, given their long post-flood life spans, no human died until long after the Lower Eocene, and thus there could be no human fossils.

The fact remains that, given his assumptions and specifically excluding hominids, his method for determining kinds is perfectly valid. The assumptions are correctly followed where they lead. So where does this become cargo cult science? It’s in the failure to consider other implications of the scenario.

Wise completely ignores the Flood sediments. Under his assumption, every mammal kind (including humans, incidentally, which had a large pre-Flood population) should be represented in the Paleozoic and/or Mesozoic record. But this would imply that there are at most three or four kinds of placental mammals. And that’s being generous; many paleontologists think that no Mesozoic fossils represent placental mammals, which would make them at best a single kind.

Here’s another corollary that Wise does not consider: any species that appears both before and after the K-T boundary must be a separate kind from any other. While this applies to very few mammals, it would be useful for other taxa.

Speaking of other taxa, it’s clear that most kinds — tyrannosaurs, gorgonopsians, stegocephalians, palaeodictyopterans, and so on — became extinct too soon after the Flood to leave any fossil record at all. It isn’t clear why YHWH felt it necessary to put them all on the Ark, only to abandon them immediately after, but I suppose He moves in mysterious ways, etc.

We will not even think about plants, aquatic animals, forams, and such. They aren’t important, and Wise’s line of reasoning depends entirely on the Ark.

One final tidbit: if we accept the K-T boundary as the end of the Flood, and accept further that the Ark grounded on Mt. Ararat (which most creationists do), we have a conundrum, as Mt. Ararat is a Pleistocene volcano, which formed, by the chronology above, several hundred years after the Flood ended.

115 thoughts on “Baraminology of the Flood”