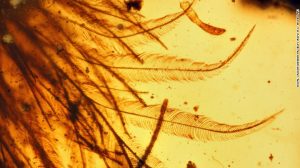 I’d love proponents of both evolution and ID to tell me how their theories predicted this, along with supporting documentation from before the discovery. Thanks!