Historian Jon Meacham: “To some extent what’s happening is as particularly mainline Protestantism begins to fade from the center of the country, to some extent political strife and political loyalties have replaced religious belief and religious practice.” 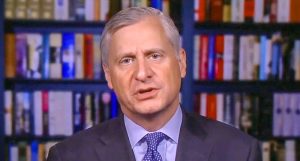 Obviously that is in the UK, but perhaps it’s a worldwide phenomenon.

There is a natural human impulse to seek meaning and order and community. And that more often than not at the moment, people are seeking meaning order and community in political tribalism as opposed to traditional religious communities and affiliations.

Traditional religion is demonstrably on the way out. What is, if anything, going to replace it?