Which is an interesting list because it lists things that “won’t happen” – strange because they cannot be falsified unless one has infinite time, they can’t even be used as falsifiers because of the very soft nature of the claims they make.

I think the inability of ID to proffer mechanisms limits its ability to make predictions, so it must settle with being unhappy with the current state of evolutionary theory (and “materialism”) instead. Anything remotely positive seems to be predicated on “what a designer would do” – and here ID finds itself at odds with … itself:

A The only statement it makes about that is that the designer had the motivation to make the structure that is designed.”

So ID has to make predictions without any motivations or mechanisms.

“From an ID perspective, however, it is extremely unlikely that an organism would expend its resources on preserving and transmitting so much ‘junk’.” , Jonathan Wells, “Using Intelligent Design Theory to Guide Scientific Research,” Progress in Complexity, Information, and Design, 3.1.2 (Nov. 2004)

It is strange that a claim is made about “an organism” (or perhaps by proxy, evolution), rather than the designer. Of course from an evolutionary standpoint anything in the genome has the possibility of being used as genetic material to create new capabilities, so one can argue that it’s all valuable to some degree.

More honest ID predictions would be:

“Genome size should strongly correlate to organismal complexity” – The designer’s ability to economically create complex morphology should be reflected in optimized genomes, both scaling together.

It’s harder to find this explicitly stated as it usually expressed in terms of “the fossil record not supporting Darwinism” – for example in link above:

“3. Complete series of transitional fossils will not usually be found because most proposed series have never existed. Eventually, researchers will give up on ideologically driven nonsense and address the history that IS there. They will focus on discovering the mechanisms that drive sudden bursts of creativity.”

So let’s look at human designers and one of their more successful designs: 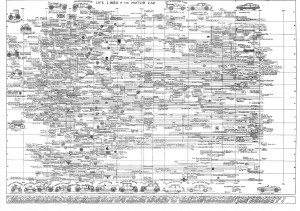 Cars have evolved incredibly in the past 200 years, and models now change some features annually. It must therefore be true that

So get digging, IDists.