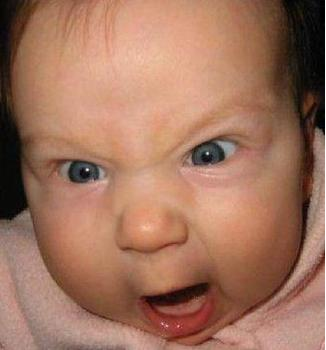 A commenter at Uncommon Descent wrote

Keith, I am not convinced that you are an atheist. I believe that you are angry at God and suffer from cognitive dissonance. And to say that the evidence supports your materialist belief system is completely absurd!

I’ve seen versions of this “angry at God” accusation levelled at non-believers quite often and I wonder why those that use it think it makes sense.

The indomitable KeithS responds later in the same UD thread:

Okay, here’s some psychologizing for you guys:

You realize that atheists have good reasons for disbelieving in God and that they make good arguments to which you have no intelligent response. This makes you very anxious. In a vain attempt to lessen the anxiety, you try to convince yourselves that the atheist isn’t really an atheist, he’s just angry at God. That way you don’t have to take his arguments seriously. It’s much easier to write them off rather than acknowledge the painful truth: you cannot answer them, and your faith is irrational.

I’m not sure I agree with Keith on “…atheists have good reasons for disbelieving in God” and I would say myself that I have never had an inclination, need or desire to believe in “God” and thus never needed to convince myself that disbelief is a better option. I have never been a smoker. As a kid I tried to emulate others and puffed away but I couldn’t get past the point where addiction presumably kicks in. I have great respect for those who, having succumbed to addiction to nicotine, have been able later to kick the habit. Similarly, I can admire an ex-believer who has decided to quit. It must involve a great effort of will but at the same time I just can’t grasp the appeal of believing in the first place.

I’m sorry if the analogy regarding addiction is somewhat pejorative to people with religious convictions but I do find great difficulty in understanding the whole concept of “virtuoso believing“. I’m sure it involves emotion much more than reason. So while I’m puzzled that anyone could categorize an atheist as “angry at God” I can see why there is mutual incomprehension between believers and non-believers. Also being a non-smoker makes me less of a campaigner against smoking. As long as people don’t insist in blowing smoke in my face or that I should try this new/old brand of cigar, then I claim no right to stop other people from enjoying a quiet smoke.

I think there are one or two non-believers here. Is anyone angry at God?